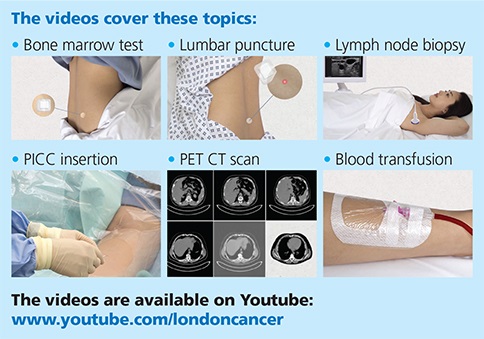 UCLH Cancer Collaborative has produced six patient information films, subtitled into nine languages in addition to English, on the most common tests and procedures used to diagnose blood disorders.

A lack of easily accessible information, especially in foreign languages, is often given as one of the reasons for poor cancer patient experiences, particularly in London.

There is also a lack of digital patient information in cancer and, where it exists, the language is usually restricted to English.

The films were produced in collaboration with Design Science and in consultation with patients, doctors and nurses. The films cover some of the tests that patients may need to undergo in hospital to diagnose blood disorders and other conditions. The topics include:

The films have all been subtitled into nine different languages, in addition to English. These languages are: Arabic, Bengali, Chinese, Farsi, Polish, Portuguese, Somali, Spanish and Turkish. These languages represent the most commonly requested languages in London, out of more than 300 languages spoken in our community.

“Coming into hospital for tests can be a daunting experience. We wanted to create these films to guide patients through some of the most common tests that might be requested as part of their diagnosis.

“If patients know what will happen step-by-step they are less likely to miss appointments and more likely to feel comfortable and have a positive attitude to their care.

“We felt it was crucial to make the films available in other languages, apart from English, to ensure that the various sections of our community can fully access this important patient information.”

Declan Sheehan was one of the blood cancer patients who helped to advise on making of the films. He said:

“High quality patient information, that is easy to access, is so important when you are attending hospital and being referred for tests. These films explain the procedures in a simple and clear way. Also, the fact that they are available in 10 languages will hopefully mean that they will reach and help many more people.

“I believe that the films will prove extremely useful to patients across the NHS, not only in London but also across the country.”

The films are available here: https://www.uclh.nhs.uk/BDfilms