What is bowel cancer?

Bowel cancer, also known as colorectal cancer or colon cancer, affects the colon (large bowel) and rectum (back passage). Both men and women can get bowel cancer. Bowel cancer is the fourth most common cancer in the UK. According to Cancer Research UK, there are now more than 41,900 new cases of bowel cancer being diagnosed every year. Bowel cancer can affect any age but it is more commonly diagnosed in people aged 50 and over.

The symptoms of bowel cancer include: 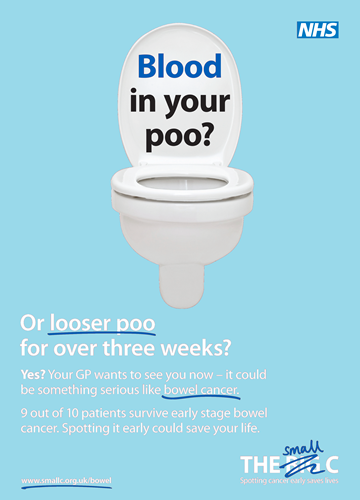 When to see your GP

Bowel cancer symptoms can be subtle and don't necessarily make you feel ill. Some of the symptoms are also very common and most people with them don't have cancer. However, the sooner bowel cancer is diagnosed the easier it is to treat. You should see your GP when you notice a change that isn’t normal for you. If you have one or more of the symptoms listed above you should see your GP.

If detected early, people have an excellent chance of surviving bowel cancer. More than nine out of 10 people will live for five years or more after an early diagnosis. Bowel cancer is more difficult to cure if it is caught at a late stage when it might have spread. That is why taking part in bowel screening and going to see your GP if you notice any unusual symptoms is so important.