What is lung cancer?

Lung cancer is one of the most common cancers in the world and because for many patients the outlook is poor, it is the commonest cause of death from cancers. Over 46,000 people are diagnosed with lung cancer each year in the UK and there are around 36,000 deaths. Whilst the large majority of lung cancers are caused by cigarette smoking, around 1 in 7 people who get the disease have never smoked. Lung cancer develops when abnormal cells in the lung multiply and form a lump or a tumour which can then spread to other structures within the lung and can also spread to other organs in the body.

Early diagnosis of lung cancer is crucial. If lung cancer is detected and treated in its earliest stages, more than two thirds of people will survive for 5 years or more. However, once the cancer has spread to other organs the chances of long term survival are very much worse. This is why it is so important that you go and see your GP if you experience any of the symptoms listed here.

Not all cough and breathing difficulties indicate COVID-19. A cough or breathlessness that goes on for more than three weeks could be a sign of lung cancer and should be investigated, particularly in people who smoke or used to smoke significantly. Lung cancer may have very few signs or symptoms in the early stages, however, the most common symptoms are listed below: 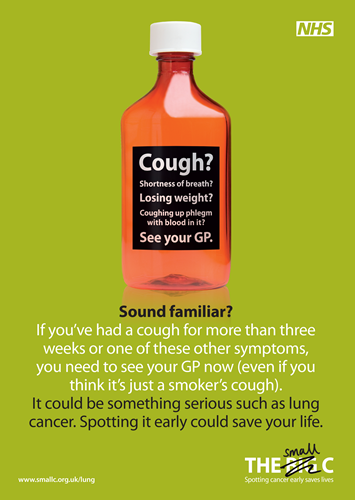 When to see your GP

If you have any of these symptoms you should make an appointment to see your GP. Even if you're worrying about what the result might be, you shouldn't postpone seeing them as an earlier diagnosis improves the chances of the cancer being treated successfully. Remember it may well not be cancer, but it is better to have symptoms checked as quickly as possible. If you have COPD / emphysema, you should attend your annual review and tell the healthcare professional you see if you have new symptoms or a change in your symptoms.